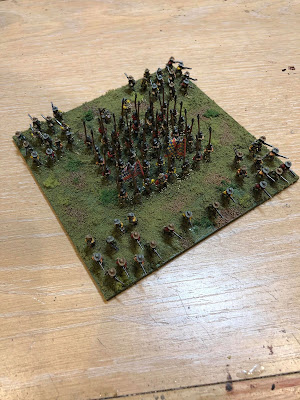 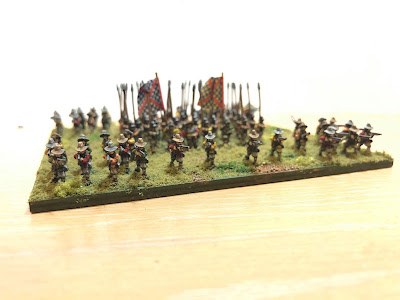 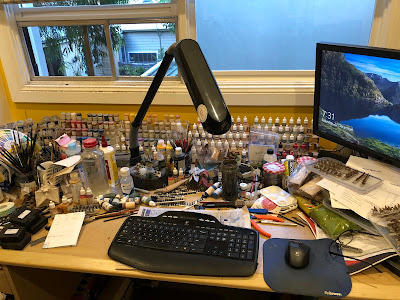 I'm sure many of you know how it works ... you go onto a website looking for something particular and then get sidetracked and follow a few more links / threads and end up not where you intended but close to a "Checkout" button.

Well that what led to the purchase I'm showing below.  I went onto Shapeways to look for a 6mm Freya Radar for my Normandy Germans.  Then saw a reference to a Mulberry harbour component which ended up with these landing on my doorstep.

Realising that it would not be too often that I would use the Harbour setup, I saw something else that I thought may have been more useful - Rhino ferries.  So click and a few of them were on their way.

No comments on the prices if you follow this link :)

All of these come from https://www.shapeways.com/shops/miniandbeyond?section=1%2F300+WW2&s=0

Start of something "big"

I have long looked at Pendraken 10mm figures and wondered whether I would - considering I have tons of unpainted Adler 6mm Napoleonics that I am gradually painting my way through.

Well I thought I should get a few 'test' packs to see what they would look like and how easy they were to paint.  I have wanted to do the War of Spanish Succession after being inspired initially by the atmosphere and paintings at Blenheim Palace.  This was further encouraged by the wonderful publications of Charles Grant in his Refighting History series.

So a test unit was embarked on a French one was the result.  I'm pretty happy with the way it came out and was very easy to paint and base.

Plans are a foot for Ramilles! We met at Annandale yesterday for a great game of Baroque with some lovely Thirty Years War figures painted by Maurice, Bob and Grant. Maurice and I were opposing a nasty looking bunch of Swedes.  Managed to play to a conclusion in about 4 hours of game time.

Most of the villages / hamlets are from Total Battle Miniatures 10mm range.

My pike and musket regiments in line before the battle. Part of the Swedish line opposing me.  Unfortunately out of shot to the right of the Swedish infantry was a large number (five regiments) of Swedish horse.  Against them I only had three regiments.  Pretty obvious that this flank was going to be the result of the battle. It didn't take long for the horse to come to grips with each other.  My first unit of Cuirassiers below didn't earn their horse feed on the day.  These guys lasted one round and with the followup they routed. Action pretty quickly turned to my massed Reiters taking on another unit of Swedish horse.  These Reiters has inserted themselves into a gap between villages and were protecting the flank of my infantry as they slowly advanced towards the Swedes.  On the day, they fought as gallantly as anyone could hope.  This melee lasted in the vicinity of five or six turns.  In the end they broke but only once they were contacted on the flank by another fresh unit of Swedish horse. While the horse battle was going on the infantry ground their way towards each other.  As we advanced, my artillery slowly took chips off two of the Swedish units to the extent that when we finally met both Swedish units did not last long at all. Unfortunately my two units of infantry in the foreground of the photos took a few rounds of fire from the more powerful Swedish units before we could get into melee with thee.  This resulted in both being thrown back and then quickly overwhelmed by the Swedes. The end results was that both our armies broke on the same turn - a very enjoyable draw on the day.

These are the first Romans for my Punic armies and my first ones ever.  They are the lovely Aventine Miniatures figures - a real joy to paint and so well animated.  Shield designs are from the equally good LBMS.

The photos are shocking - taken with the phone and flash in a dark room.  Shades are much harsher than in reality and yet some are not visible (the red). As I do more I will try and take better photos - but at the moment just blogging something is an improvement for me on the past 18 months :) 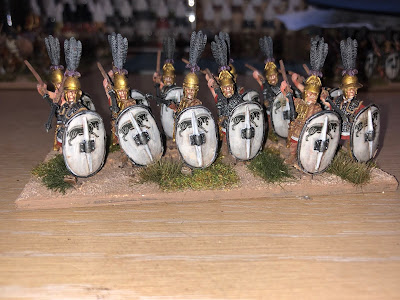 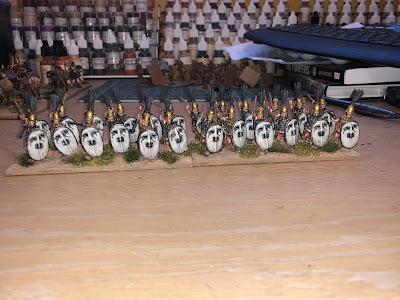 Finally managed to get some of the backlog on my desk finished.  I've been working on it in fits and starts for most of this year and really don't have too much to show for the time.  But in any case I will share the stuff finished over the next few posts.

First up are three bases of Numidian Cavalry for the growing Punic Wars collection.  This is one bag of plastic Victrix minis.  I already have seven bases of metals and in look I cannot tell them apart.  Obviously the weight is a give away.  I have one more bag to go of these and that will be enough cavalry to make any army feel like a pin cushion. 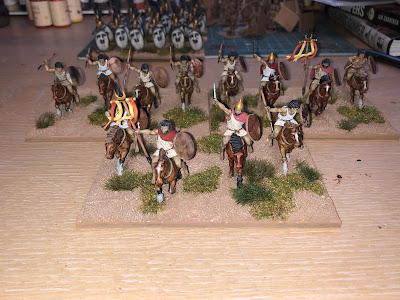