Have just finished all of the work on the ceiling ready for painting tomorrow.  All gyprock seams covered and smoothed and the cornice installed.  Paint is sitting on the laundry cupboard waiting.

Got 4 cabinets on sale during the week at Ikea - reduced in price from $389 to $189 plus a 15% discount off that.  I first saw these on Olincanalad's blog.  They come with glass shelves but more could be installed if needed.  They also have a hole at the back of the two levels to take power for a small light to illuminate the figures inside.  They were delivered on Thursday and all eight of the boxes are lying in the lounge room which is OK as long as they are gone by next Saturday. 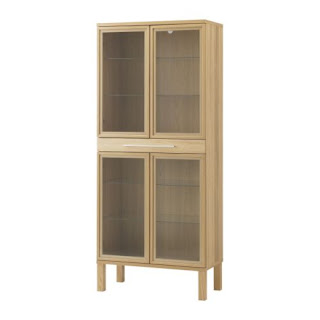 So, quite a bit of work to do over the next few weeknights to get painting finished, carpet tiles down and cabinets installed.
Posted by rct75001 at 6:03 PM 4 comments:

Here is one of my new painting sticks.

While I had the tools out of the shed on the weekend working on the basement, I grabbed a length of pine, cut it down and ran one end around on the router table to get the 'comfort' grip.

First use last night.  Feels good to use and no more falling over figures.  Question will be what I use to hold the figures on that gives a good balance between hold and removability so I can reuse the sticks over and over.

Progress on the room

Time for an update on the room.  I know it has been a long time since I said I hoped to get the plasterboard ceiling up in a week or two - well a few months has passed.  But I have an excuse which I will explain in a minute.

In any case, after much hard work with my son we got the plasterboard up.  It has taken ages to get this correct as the room is anything but square - the beam supporting the floor above is up to 60mm out of alignment over its length.  Then there are the various other alignment / set issues with trying to put a plasterboard ceiling up on timbers that were never installed with that in mind.  Hope when it is finished and in white not too many blemishes will be seen.

Have started taping and using the setting compound last night.  Intention is to do a bit each evening this week so it can be painted at the weekend.

Cupboards to hold troops / terrain have been spotted at Ikea - order will be going in this week for a home delivery - they are 72kg each and my car won't fit the boxes. 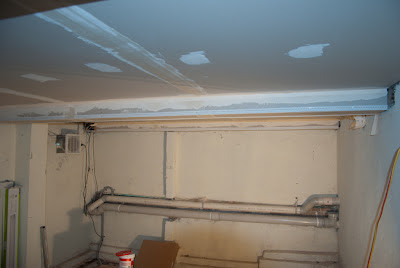 Now for the reason for the delay.

About 3 months ago we had the most torrential rain in a day that I have ever seen in Sydney.  Unfortunately, in this older part of Sydney many storm water outlets go into the sewer system and it chose that day to block at the bottom of our street.  Our next door neighbour who is up the hill is one of those whose storm water goes into the sewer and it chose their outlet to fountain out up to 2 feet high from 11am until the water board could fix it at 11pm that night.  The newly installed sump pump was coping very well with the rising water table until the quantity of water coming from next door inundated elsewhere under out house and partially submerged the heating system which shorted the power.  No power - no sump pump.  It took 10 minutes or so to isolate the issue and rig up a power lead from elsewhere in the house to get the pump going again.

We then spent the next 3 days cleaning up as the accumulated water elsewhere under the house found it way down through little streams and into my room which is the lowest point and then out through the sump pump.  It did sterling work over 3 days almost full-time on.