As my last post will attest, I have many interests and in many scales and I have a constant dilemma on what to paint next and where to concentrate. 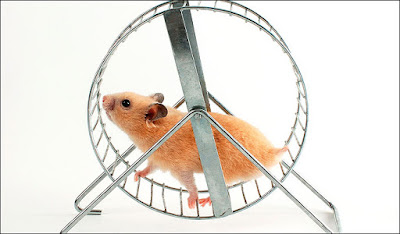 In response to the occasional 'painters block' post on forums, people say paint what takes your fancy - but to me that means indecision and concerns that projects will never be finished.  On the other hand, I admire and am inspired by the work of James on his Olincanalad blog and how he is able to focus on a project for a period and then get it done.

While I do have many interests, I think the bedrock that I will come back to time and time again is the 6mm Adler Napoleonics.  I love the heroic endeavour that goes with Napoleonics and the Adlers allow me to field large formations but still identify specific units.

Following this, the three other key periods that most interest me are:
Which brings me to a decision on what to work on in the coming year.

To resurrect a quote from a gaming mate a few years ago "Aim for the stars, because if you aim for the streetlight, you may just shoot yourself in the foot!”

6mm Napoleonics
Finish the French and British (and Allies) so I can play Quatre Bras with terrain.  Along the way keep going on my Prussians.

28mm Renaissance
A heavy focus - but not by just doing one faction.  I will cycle through the armies and troop types with an intention of having this finished in two years.

28mm Seven Years War
As noted above a slow burn - I will continue work on my Eureka Saxons - two of seven units are done.

20mm WWII
While I may paint some vehicles and troops, I have decided to focus on terrain so that I can get more games on my table and not have to rely going to the club for games.  Besides, an atmospheric table is a strong motivator for me to paint more figures to get on the table.

Baroque
Last in the list and perhaps the greatest threat to plans will come with the likely release of Baroque in the first half of the year.  An easy and sensible response would be to paint a Covenantor army from the ECW to use.  A slightly more threatening development would be to get drawn into the Anglo-Dutch armies of the late 17th century for which I have no figures at the moment.

Ancients
I haven't mentioned ancients yet - but I have figures for a few more Impetus armies.  My aim will be to get one Impetus army a year done.

Reflecting on the review of 2015, It is hard not to notice the amazing throughput in 2010 and 2011.  Both years I had participated in the year long group builds on the Guild forum.  These were builds where you lay out what you are going to paint over the year with various targets for four or five tasks.  I have not participated over the last two years as I found it very frustrating to feel compelled to paint something that I had set out earlier in the year when my tastes has changed.  But there is no denying the impact on production.  Perhaps if I align the targets to the goals it may be time to participate again.
Posted by rct75001 at 9:53 AM 7 comments:

I have been inspired by a number of other blogs to review the year that was.  I particularly like the ideas as it will be a nice reminder for me of what I did during the year to look back on.

So how did the Lead Mountain survive the year....... 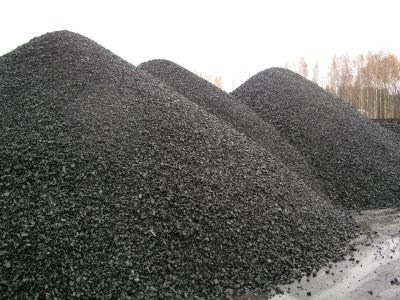 This post will be about what I got up to during the year from a hobby perspective.  I will follow it with another one in a few days on the plans for the coming year.


While I get great enjoyment from painting and modelling, at the end of the day it is when we put the armies out on the table that it all comes to life.

I have been very lucky over the past few years to meet a great group of gentlemen (well almost all are) through the Goulburn Valiant Stormers.  This has led me into many new fields - I knew nothing of ancients until two years ago as an example.  It has also led me to the wonderful Impetus rules when I was first introduced to them by Richard and Ralph.

So gaming this year has largely centred around the club where we have played a number of Impetus games - I am particularly taken by this photo that was taken so wonderfully by David H.  It shows various units from my Italian Wars collection on the attack. 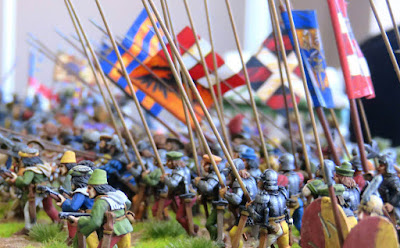 We also competed in three Impetus comps - Cancon, Wintercon and MOAB.  Each of these run over a weekend and the fun of the table is almost exceeded by the laughs over lunch and dinner.

I was also lucky enough to play with Ralph's large and wonderful collection of 15mm Thirty Years War as a playtest for the new Baroque rule set that is coming early this year.  We are really looking forward to it.

There have also been a few games of 20mm WWII using RapidFire - especially the Golden Monty weekend organised by Chris K.


During the year I have walked down a path that some would say can only lead to madness.

I spent a considerable amount of time creating an inventory of all my unpainted lead, plastic and resin.

Many of you will say I am mad and what a waste of time - but it has already saved my a few hundred dollars where I was about to pounce on a sale but chose to check the inventory first to discover that I already had the items about to be purchased.

So what follows are two graphs showing the percentages of my unpainted pile by period - one based on actual figures regardless of scale and one based on an adjusted count of 'painting points'.  For this purpose I am using the point system from the Analogue Hobbies Paint site. 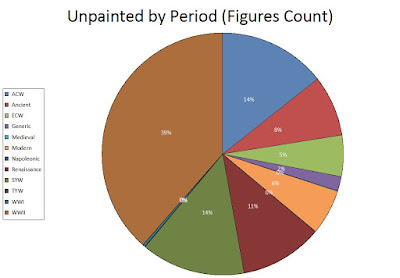 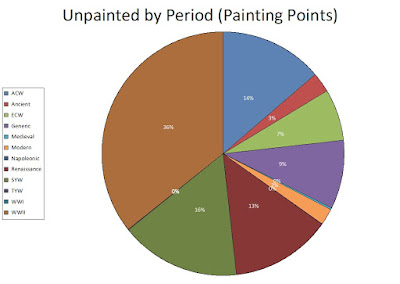 When I said that I had inventoried all of my unpainted stock I meant almost all of it - noticeable absences are my 6mm and 28mm Napoleonic projects and some 1/1200 and 1/2400th scale naval projects.

I'm sure the more astute among you will have noticed that I have shown percentages and not actual numbers of figures - let's just say there are lots.


In addition to the inventory, I have started to record what I have painted by year.  My inspiration for this came directly from the six monthly reviews that I look forward to reading on Jonathan's wonderful Palouse Wargaming Journal.  I have to say that in this regard I have unashamedly copied the style / content of his graphs.

I have been painting figures since 1980 in a serious fashion - not counting the various Airfix ones done prior to that.  My first projects were Modern and WWII 1/300 micro armour which moved onto the wonderful 6mm / 8mm Adler Napoleonics.  While I have all these painted units and occasionally get them out - I have no record of when I painted what.

As a consequence, my records largely follow this blog and the records that were kept through my participation in the regular painting challenges on The Guild forum - but unfortunately they only start in 2010.

The first graph shows painting by year by period based on an actual figure count. 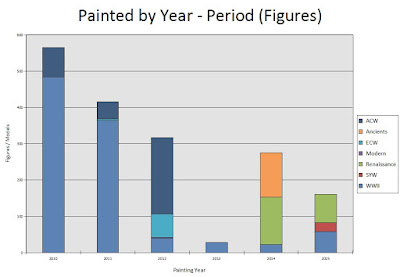 While the next graph shows the actual figures adjusted using the Analogue points. 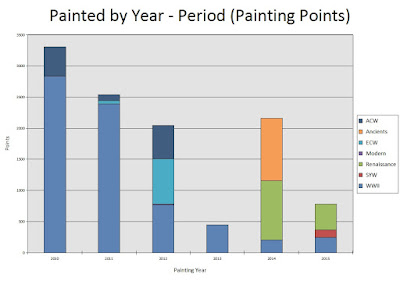 You can see the predominance of 20mm WWII in the first few years with some more variety coming through in later years.

But perhaps the biggest shock was the variation in output across the years.  2013 was the year that I stripped out my painting room and proceeded to renovate / remodel it and build my stylish bookcases to hold my large collection of military history books.  This consumed much time and the room was not usable for 3-4 months as I was doing it all around work and family time.  This year reflects a number of things - work and life in general, time taken to prepare the inventory and a general painting malaise that set in around the middle of the year. 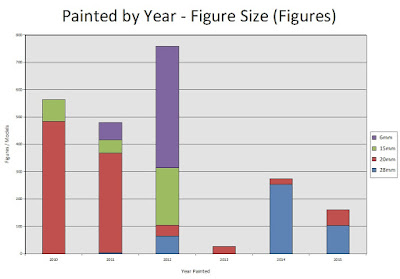 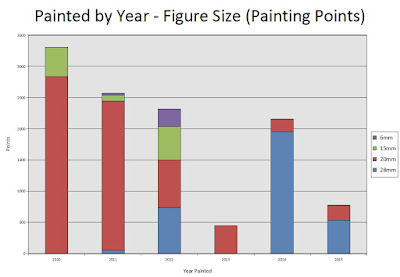 So that was the year that was.  I have enjoyed the gaming and friendships that come with it - but have not had a very successful year on the actual painting front.  Always next year as they say.
Posted by rct75001 at 9:11 PM 4 comments: